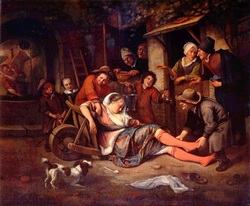 The origins of the Kooikerhondje (Dutch Decoy Dog) from the Netherlands can be found as far back as the 1500's to 1600's. Kooikers were originally developed and used by Dutch hunters to lure ducks into traps. When duck season was over, the Kooikerhondjes would hunt through crops, storage areas and fields destroying rats, mice and moles. They were also a much loved family pet. It is even said that the decoy dog owned by Willem van Oranje (William of Orange) saved his life by warning him of a Spanish assassination attempt.

In many 16th and 17th century dutch paintings the Kooikerhondje is depicted as a loved family pet. Many of the Dutch Masters painted family portraits that depict a small decoy type dog. It is believed that this dog originated from the Spioen or spaniel. The destruction during the Second World War almost caused the extinction of the breed. The diminishing wild duck stock aggravated the situation even further. 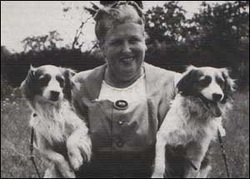 Baroness Van Hardenbroek Van Ammerstol
In 1939, there were believed to be only 25 Kooikerhondjes in existence. Luckily the Baroness Van Hardenbroek van Ammerstol took an interest in the Kooikerhondje breed. She gave a picture of the type of decoy dog she was looking for to a pedlar and asked him to look out for dogs matching this description. At a farm in the province of Friesland the pedlar found a bitch now well known as Tommie. Though the farmer did not want to part with Tommie, he let the Baroness breed with her. Tommie became the founding bitch of the Kooikerhondjes. She was mated with Bobbie and they produced their first litter in 1942. The only surviving pup was named Bernard van Walhalla. Tommie was mated with another dog in 1943, Bennie, and produced four bitches that were named after the princesses of the Netherlands and Tommie herself: Margrietje, Irene, Trix and Tommie 2. (This was quite audacious of the Baroness, since in 1943 the Netherlands was occupied by Nazi-Germany and any reference to the royal family was absolutely forbidden.) The Baroness, as before, searched for suitable males to breed to these females and found them mostly on small farms and with private families. Tommie was returned to the farm in Friesland when she became too old to have another litter. 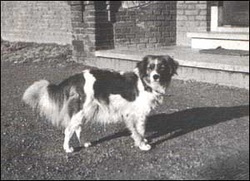 Tommie, 1942
Eventually, other people became interested in breeding the Kooikerhondje. Using Tommie's offspring, dogs who fit the description as well as two dogs of decoyman Bosma they created their perfect dog. In 1966 the Raad van Beheer, (the Dutch institute that decides whether a breed can become officially recognized or not), decided that a provisional register could be installed. The dogs that passed the judging could be admitted to the register. Nico, great grandson of Margrietje, was the first Kooikerhondje to be admitted to the provisional register and can be found in almost every modern Kooikerhondje's pedigree. By December 20, 1971, when the Kooikerhondje received its final recognition, a sufficient gene pool had been established. From that moment on, no unregistered dogs were allowed to participate in the breeding program. The breed is still quite rare, but is gaining recognition throughout North America.